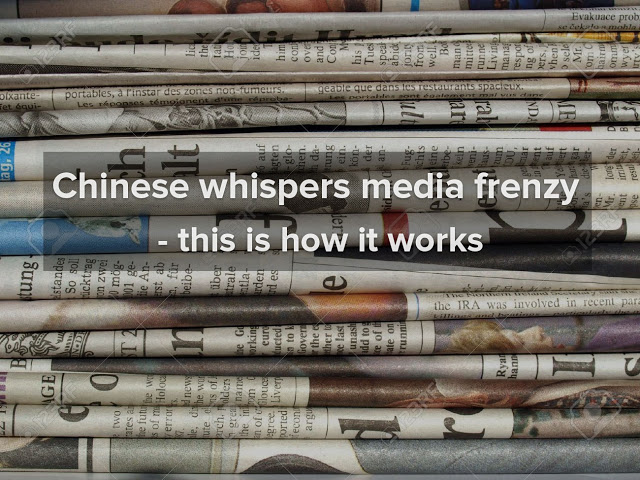 We had a little bit of a chock when we were told that we were in the Mirror..and the headline was something that we never said! Later on we saw we were in plenty different European newspapers, many of them claiming stuff we haven’t said or done as well. Some said they had spoken with us and one of them even put a picture of a different family in their article.

So, I will explain how this came about. In July we were asked if we wanted to be in a Youtube-film on the Barcroft Media channel. We were offered two hundred pounds and a promise of our links on their website. The journalist, Nathalie Bonney, made a film and wrote a lovely article which we approved of. Their business is to sell stories to the media. They have a lot of viewers, in general we like the idea and their stories on their site. It was a way to convey peaceful parenting and inspire families to take the step and become digital nomad worldschoolers – like we have. I am pleased that the idea has spread.

So this weekend, The Mirror called my husband and asked a few questions. They read back the quotes and assured us that the article was fine. However, on Sunday, we found that it wasn’t at all what he had said to her. The thing is, our lifestyle is “too boring” for it to be worth writing about like it is, so newspapers enhance and make up stuff to appeal to their readers. Actually worldschooling and digital nomadism is not uncommon now when you can take your work with you to where you want to be. Just Google it.

I have been interviewed many times before because of my plane crash, so it is not the first time this has happened and I knew the risks. But hey, if you are a critical thinker, you will know that you shouldn’t believe everything so then you probably wont give a fuck. I wont either until I finished listing the most amusing misinformations here. Perhaps this is a good warning for mainstream media to better themselves. On internet we have anarchy and its easy to put out facts. So you will have to adapt to it sooner or later.

1. “Our children are more advanced / too clever” 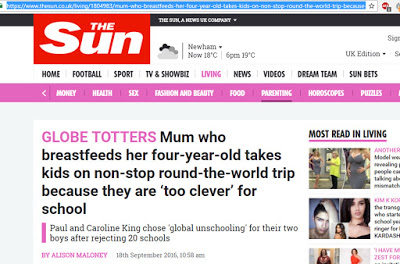 Several newspapers claimed this. The ones I found are The mirror, Closer, Mogaznews and The Sun. We have never said said it. We have said that the school system is forced in Sweden, and all schools have to follow a government programme which we have read and don’t agree with. In Sweden they don’t teach economics until the child is 16. They don’t teach logic. They neglect a load of practical skills. The schools do not have the flexibility to include these areas even if they wanted to. 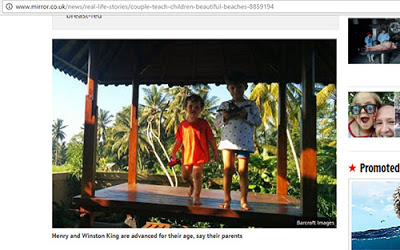 2. “We will never send our kids to school” 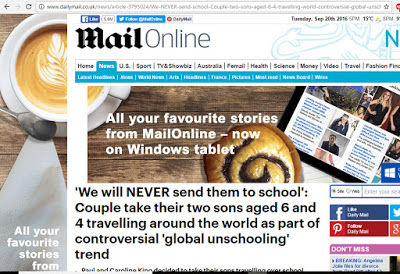 We have never said this either. Actually we have told Barcroft media on the video that our children can go to school if they want. In fact, we are always looking for a school that fits with our values which is peaceful parenting and non-aggression. If we find a school that fits that in a place where we can live we will definitely try it. Daily Mail, Mogaznews and a few other minor ones claimed we said this.

3. Another amusing headline is “Mom makes son drop out of school”

This website and this one claimed that. Which is not true of course. Our children have never been in school. They were four and two when we lived in Sweden. They tried 3 different childcare options. They didn’t like the Montessori one because the staff changed and it wasn’t good anymore.

4. “Family sell everything to take children on amazing worldwide adventure”

Daily express claimed that.  Well not really. We had to sell our house in order to not have any ties to Sweden according to the advice from our accountant. The Swedish government decides unilaterally if you are resident there or not, and they count the number of ‘ties’ you have to the country. This includes family, owning property, spending time there. The Swedish government has been known to track down people who are no longer resident there if they still have ties.  We fund our travels from our websites Hammockheaven, Mypashmina and TheRealRugCompany, not from selling everything.

5. “Mrs King considered the idea when Winston was claiming to be bored at nursery at was learning to read at the age of one.”


Daily Mail claims we said that. Again, twisted facts. We thought about homeschooling, found out the law was quite rigid, made the mistake of speaking to local government officials about our plans, and realised we would have to be based in the UK.

6. They found the schools in Sweden where they lived ‘too restricting’ for their liking and wanted to try a more radical approach to teaching”


Metro says we say that. Its an understatement that they are “too restricting”. Find out more here. All schools in Sweden are state funded, and the one who pays the piper calls the tune. According to the law, the schools get to decide what to do with about 8% of the time,  90%is  decided by central government, and the child gets to decide 2%.

7. “Their dad revealed that when the boys saw a Roman amphitheater they found it boring, they were also not “bowled over” when they saw the pyramids.”


Quotes TheMirror, Closer and TheSun. We spent a couple of months this autumn learning about volcanoes, romans and ancient Egypt. We visited many museums, read many books and watched plenty of documentaries. The kids were so interested so we decided to actually go to those places, which we did, because they asked and we also thought it was a good idea. Any of you who have been at the pyramids knows how unpleasant the dirty streets are in Giza and how annoying the sellers are. The day we visited the amphitheater was a day when we already had been busy exploring so the kids were tired by the end of the day.

8. “The pair were also unhappy with the limit on the number of days they could take the boys out of school. So they decided to opt out all together.”

Quotes TheMirror and a few others like TheSun. In Sweden, the law allows 10 days per year. The power over whether or not to allow a parent to remove their children from school for 10 days is with the head teacher who has to ask the municipality for permission which they may or may not grant. (Most likely not if you dont plan to sign your kids up for a Swedish school abroad. It is illegal to disobey the decision.

Plenty of newspapers claim different numbers of countries that we visited. Some say 15. When we were interviewed we had visited 26 countries with the kids, now they have been to 35. Me and Paul have been to 60 and 62. Also some say that we spend £3000 per month. This is not true. Might be a month if we buy long haul tickets only. Some say that Pauls education costed £4700 per term, that might be the current fees, but the first term Paul went to that school, it cost under £700. It was quite a long time ago and private school fees in the UK have risen a lot faster than inflation.

The term “Global Unschooling” is used – which the journalist Natalie Bonney coined. Its normally called “Worldschooling“. I think it sounds great. My husband just bought the domain.


Yahoo news and a few others claim that we “reject school”. Just to repeat – in Sweden,  you don’t have a choice to opt out. We never rejected school – just not being allowed to opt out! We want our kids to be the customers rather than the product.

12. “Last year Henry smashed a £600 laptop in a fit of rage and laughed when he ­realised it had broken.” “Instead, Paul cancelled a train ride he’d booked and tried to explain they’d used the money saved to help replace the laptop.”


Quotes The Mirror and also The Sun. He didn’t do it in rage. And Paul didn’t sell any train tickets. Once when Henry was 2, I was cooking and didn’t give Henry the attention he needed for a while. He took my laptop and dropped it to see what would happen. Now he knows that laptops break easily. When Henry saw how upset I was he offered to sell his ride on train so that I could buy a new one, which was really lovely.

13. “Winston is so advanced when it comes to computers he can teach me things.”

Quotes TheSun. It must sound like bullshit to you? Turning a feather into a quill. Winston knows the programming program Scratch quite well and shows us how to do things as you do when you spend a lot of time doing something!

The only news website that put out the article like it should be is Huffington Post. Thanks guys for spreading the message of peaceful parenting with your headline!

I haven’t checked if these ones were correct but here are some links to foreign newspapers I found ourselves in:

British tabliods seem to be the worst, it didn't even sound like you! I really loved the Huffington Post article. See you in a week 🙂